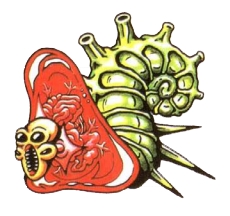 Aqua Slug is giant, mutated sea slug (the cause of his mutation is unknown.). On him is a small face with four eyes, a large red and gelatinous mass that houses what appears to be his organs, and a big green shell. He makes his first appearance in King of the Monsters 2. He is the fifth of Famardy's minions the monsters face. He was living underwater, covered in stone until the heroes found and confronted him.

Aqua Slug can freeze his opponents if he wins the throw contest with them. He spouts three red bubbles that temporarily inflate a monster. He also release a small tornado that knocks a monsters off their feet. Aqua Slug closes himself inside of his shell in order to dash at the opponent and knock them down.

Players can throw small ships that appear around his stage. These ships can give a player breathing room to charge up their power bar or to use another method of attack.

The tables have turned!
Add a photo to this gallery
Retrieved from "https://snk.fandom.com/wiki/Aqua_Slug?oldid=131157"
Community content is available under CC-BY-SA unless otherwise noted.