She can not be measured[1]

Meian (Light and Darkness), a heihaku

Apprentice of Ichijō-ryū Onmyōjutsu
Akari Ichijou ( あかり, Ichijō Akari?) is a character in The Last Blade. She is symbolized by spells, mononokes (spirits), and ribbons. Her official slogan is "Magical Little Girl" (さな, Chiisana Onmyōji).

She is voiced by Mayuko Omimura and by Kana Ueda in the pachislot title.

Born and raised in Kyoto, Akari hails from a family of onmyoji. Her father asked her to take care of the Hell's Portal when it first opened. Wanting to see the world with her own eyes, Akari complied.

When her older sister, Hikari, succumbed to a mysterious illness, Akari grew worried and suspected it had something to do with Hell's Gate. By the time her father called her to tell her do what was to be done, she sets off determined to seal the gate again and cure her sister. Her ending has her escaping her father's wrath regarding her sudden departure and starting another adventure to find a mermaid, which is all left for poor Juzoh to absorb.

A spoiled little child, Akari often ignores her father's wishes to get what she wants. She likes adventuring and often leaves home having fun despite the circumstances of the journey. Although flippant in nature, she cares deeply for her family and friends.

Akari knows some English, most likely having learned it from her hobby in browsing an English dictionary. One winpose has her say to her foe, Just a moment! as she drinks tea served to her by a Youkai. Unfortunately, she does not have enough skills to carry a conversation in English, and at times, uses it wrongly. One example is her Let's Dancing! battlecry at the start of her Speed combo mode.

The Ichijou-ryu style has the primary goal of teaching its students how to summon and control spirits and youkai, although it teaches some fighting techniques with the heihaku.

Akari is mobile enough to be pesky and be an actual threat in Speed and EX using her combos. Her Power mode makes her more powerful, but she becomes more predictable, unless she clone her enemies and use their own strengths against her foe.

Her 100 Demons' Night (Shikigami Hyakkiyakou) super move has several cameos depending on the game:

Technically, Akari cannot be killed as she replaces herself with a shikigami moments before she is slain. In The Last Blade 2, she even taunts her enemy before forfeiting the fight.

Akari sings a song which is titled as Akari's song in the Last Blade Arranged Soundtrack. An instrumental version is also used for her appearance in SNK vs Capcom: Match of the Millennium.

Akari makes an appearance in the Last Blade Drama CD where she and Juzoh once again serve as comic relief. In the alternate ending, she sets out to travel with Yuki where they appear together in two scenes.

In the Drama CD, it is revealed that Akari is very confident with her English, yet fails to make an American man understand what she is saying such as her attempts to say the common phrase: "Don't cry over spilt milk." 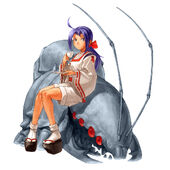 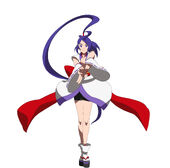 Akari in The Last Blade Pachislot