A comprehensive combat technique that masters all combat arts

Adelheid Bernstein (アーデルハイド・バーンシュタイン, Āderuhaido Bānshutain), Adel for short, is a boss character from The King of Fighters 2003 and The King of Fighters XI. He, along with his younger sister, Rose, are the only known children of Rugal Bernstein. Creators have stated that he is the "other protagonist" of the Ash saga.

He is voiced by Tetsuya Tanaka.

Adelheid and his sister Rose reside on an airship called "Sky Noah". In The King of Fighters 2003, he would challenge fighters there at the behest of his sister. His story in The King of Fighters XI implies that he faced the Ikari Warriors Team and was defeated by them. He peacefully chats with Heidern and explains that he is only following his father's legacy. In his ending for the game, he seems to appear regretful for his actions and berates his sister for insulting his opponents.

The Console Edition of The King of Fighters XIII reveals more of Adelheid's cooperation with Heidern (in which he addresses him as "Colonel Heidern") as he tries to help the forces of good suppress the evil plans of Those from the Past. When Rose is finally freed, he reassures his sister he would punish those responsible for her subjugation.

Unlike his father, Rugal Bernstein, Adel is an honorable fighter, who exhibits good sportsmanship, as demonstrated when he is defeated in The King of Fighters 2003. He also loves his sister, that upon realizing something is wrong with her, he cooperated with one of his father's victims, Heidern, to get to the bottom of the plans of Those From the Past, and at the then-strange behavior of his sister. He rarely has the evil ways of his father and has helped those Rugal has wronged on many occasions, particularly and most notably with Heidern.

His style is very similar to his father's. Unlike his father, his moves are faster and is also easier to chain. On the other hand, his moves are significantly weaker in priority. It seems the mastery of his father skills is still a long way to go, considering his Desperation Moves (Genocide Cutter, Kaiser Wave) are his father's common special moves.

Unlike his father's moves, all of Adel's moves are written directly in German (examples being "G. Wand" and "G. Kreis"). His various specials and super moves all have a "G" initial beforehand; this is short for "grosse", an alternate form of "groß", the German word for "great" or "grand". His command normals have the "A" initial, probably from his own name. His throw lacks an initial.

The King of Fighters 2003 concept artwork.

The King of Fighters 2003 artwork. 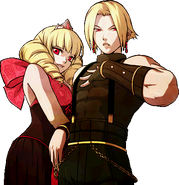 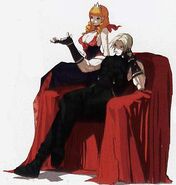 Rejected Character Artwork For The King Of Fighters XIII.

Rejected Win Portrait For The King of Fighters XIII.

Unused character concepts in The King of Figters '99 who resemble Adel and Rose.

Unused character concepts in The King of Figters '99 who resemble Adel and Rose.

Artwork by Falcoon
Add a photo to this gallery

Retrieved from "https://snk.fandom.com/wiki/Adelheid_Bernstein?oldid=154440"
Community content is available under CC-BY-SA unless otherwise noted.